If you look closely at the code from the previous article you’ll notice that all the statements are carefully ordered in the code. This is because when it comes down to actually drawing lines, if line A is drawn before line B, it will get obscured by it.

When projecting to 2d, this might give the impression that line A is behind line B while this might not actually be the case.

Which of the above is the truer representation?

We are interested in devising a method for ordering segments so that they get rendered far-to-near (a.k.a the painter’s algorithm).

In addition, as you might imagine, occlusion depends on where you stand and where you look, so our observer will be standing at at $\vec V$ looking in the direction $\hat D$ at a screen at distance $l$. This observer observes that the segments intersect. To figure which of them should overlap the other, we need to follow these steps:

First we cast each vertex onto the viewer’s plane (we will use lowercase vectors for vectors on the screen): 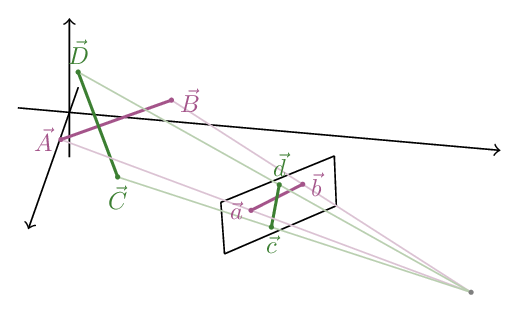 We now have two peojected segments on the surface of the viewer’s plane: $\mathbf{ab}$ and $\mathbf{cd}$

Checking for an intersection

Each segment lies on a line which can be written as:

But, what if we replace $\vec r$ with a vector’s that’s not on the line. What does the expression evaluate to?

If $\vec r$ is outside the line, then according to the right hand rule the cross product $\left(\vec r - \vec a\right) \times \left(\vec b - \vec a\right)$ will be perperdicular to both terms.

But we also know that $\vec r$ is on the plane, and so both terms are embedded in the plane as well, which means that their cross product must be in the direction of the normal to the plane $\hat n$.

According to the right hand rule, the rule holds only if the angle between the two vectors is smaller than $180^\circ$. If it’s more that that, we need to flip the order of the vectors so that we form the smaller angle between them, and as a consequence, the direction of the product flips ($\mathbf{ab}$ is black, $\vec{r}$ is blue and the cross product $\left(\vec r - \vec a\right) \times \left(\vec b - \vec a\right)$ is red):

We can summarize this:

Of course right and left are arbitrary, but you get the idea.

There is a total of 16 configuration of both segments in relation to where each vertex lies in relation to the other segment (each vertex can be either to the left or right of the other segment, and there is a total of 4 vertices, so: $2^4=16$). Granted, many of these configuration are equivalent, but just for the sake being thorough, we’ll list all of them:

As you can see, intersections only occurr if

What’s the mathematic interpretation of both conditions? Well, if we take the first condition, this means that either:

Which means that the conditions for intersection are:

Ok, now suppose the condition passes and we know there’s an intersection, how do we find it?

This is actually a geometric problem: we have a quadrilateral whose diagonals are the segments, and we want to find the ratio with which the segments divide each other. 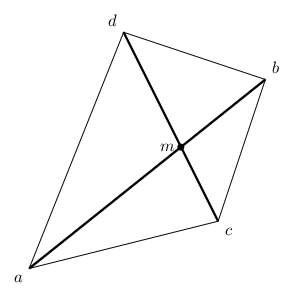 From the law of sines we obtain:

If we divide both equations, and rearrange them, we can obtain the division ratio of the $\mathbf{ab}$ diagonal:

Where do we get the sine of these angles? Well, first we observe that $\angle mca = \angle dca$. And then we use the geometric meaning of the cross product to obtain:

Following the same for the rest of the angles we get:

And finally, the intersection point: 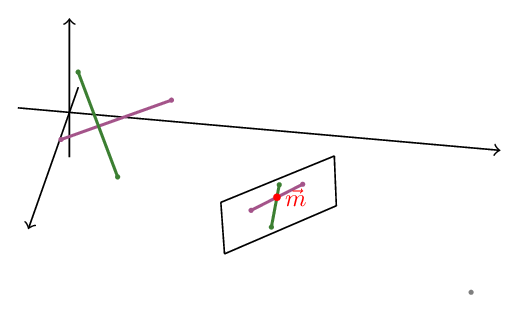 This should intersect with the each of the segments at points which correspond to $\vec m$ on the screen. 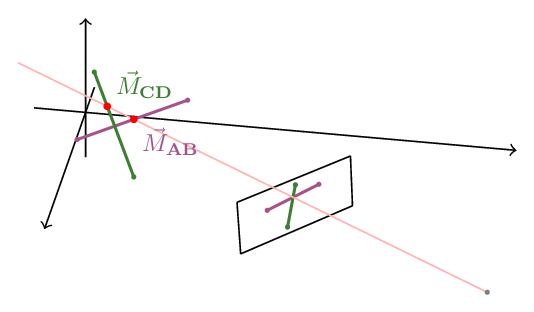 We now just need to compare $\alpha$ and $\beta$ to determine which segment occludes which:

Actually, we’re not done yet. Support we have the following situation: 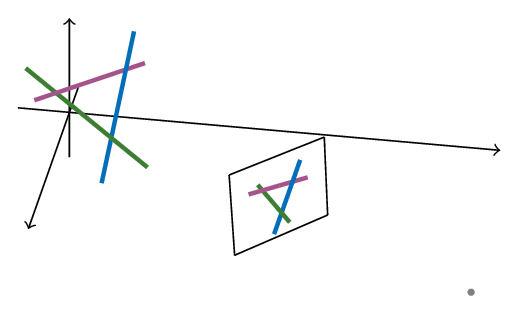 There isn’t really a way to order the three segments because for each of them it’s both in front and behind the other two.

To overcome this we are going to have to break them into segments that have only one intersection with any other segment.

The strategy is pretty simple: 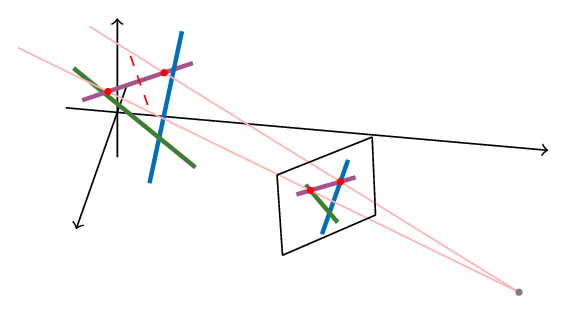 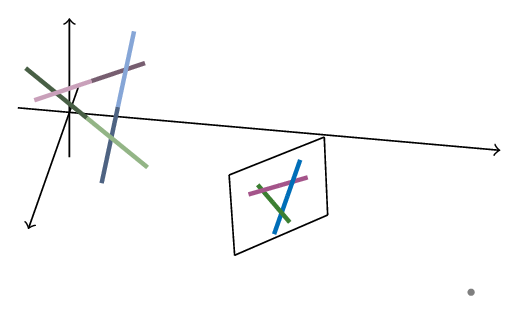 Here’s an example that combines all the elements in this article:

I went ahead and pushed the new code to the 3dpp repository together with some other improvements and documentation. Be sure to check it out!