As I’m writing this blog about something I did almost 3 years ago, I’m having some trouble remembering the exact circumstances that led me to simulate traffic in a city. However, the general direction was that I was interested in measuring how certain parameters (speed-limit, driver reaction-time, vehicle density etc…) affect congestion (and btw, the definition of congestion is also not trivial).

So, the basic idea is to have some representation of a map - a graph of streets with various metadata, and on this map, vehicles would spawn, and follow some simple rules that model a driver (accelerate to meet the speed limit, decelerate/break when entering a junction or in response to a vehicle in front).

To start, I needed a playing field - a map. So I went to OpenStreetMap a pulled a map file of the Tel-Aviv area.

The file is an XML file, and is pretty huge relative to the size of the area it represents. Mainly as it contains a lot of information that’s not relevant to the simulation (street names, buildings etc…).

What I really need (initially) are coordinates of streets. This can be obtained by parsing the <node> tags:

What we care about are the node’s id, lon (longitude) and lat (latitude). Which can be parsed and stored into nodes like this:

The next type of information we need are the actual streets that connect the nodes. Those are represented by <way> tags:

Initially, what we need is just the list of node ids that compose the road. However, there are two important points:

Eventually we can parse the road data into the ways list using:

Now, we’re almost there, as we have a list of “ways” which are themselves lists of nodes. But what we actually need is arcs, which are tuples of consecutive nodes:

If you think about it, the map file we use is a cropped map. So what would happen is that we will have lots of roads that leave or exit the map that are dead-end. If we don’t want our map to have car sinks, we need to eliminate all those dead-ends:

The node coordinates are all angular - longitude and latitude. However, on the ground, vehicles are moving at km/h (or m/s). We have no way of running the simulation without assigning fixed coordinated to the nodes.

There is an entire science to measuring the earth. But I wanted to choose something simple.

Basically what I did was take the lon/lat bounding box the of map. This describes a part of the earth’s shell: 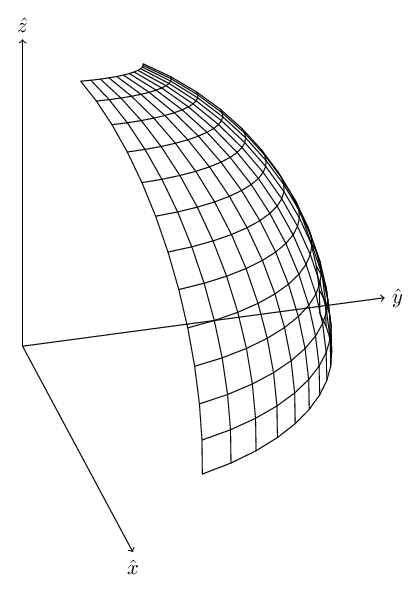 Now, we draw a plane tangent to the earth at the center of that “shell”: 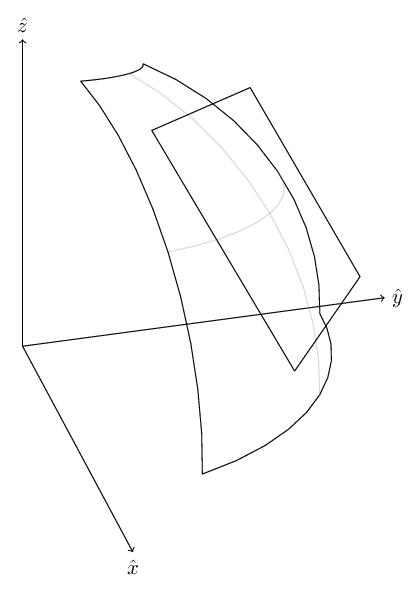 Now, suppose we have a point $ \vec E$ on the earth’s surface: 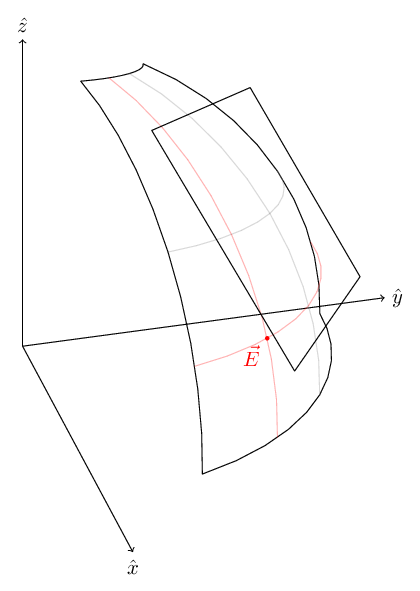 We will cast a ray from the center of the earth to that point, and continue tracing it until it intersects with the plane (or map if you will) at $ \vec M$ : 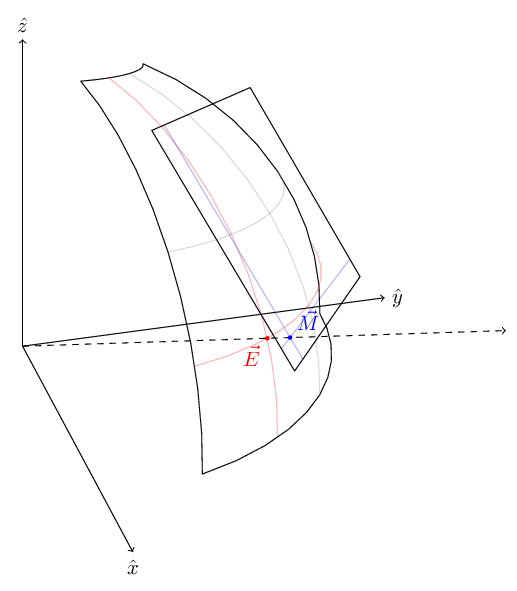 We now have a 1-to-1 mapping from points on the surface of the earth to points on a flat map!

Now we need a way to get 2D coordinates. To do that we need to select axes.

We start with a north “hint”, we can use the $\hat z $ vector as it points at the north pole. Obviously, this vector does not fit in map, but sticks out of it. We want to take the component of $\hat z $ that’s embedded in the map and use that as “north”. Generally, a vector can be decomposed in relation to a plane to a perpendicular (in the direction of the plane’s normal) and transverse (embedded in the plane, and thus perpendicular to the normal) $\hat z $ :

We can now use all that to extract $\vec z_{\parallel} $ (which will serve as the plane’s north):

On the surface of the map, we can have east/north axis and thus a 2D coordinate system.

So, first, I want to convert lon/lat coordinates to a 3d point on the surface of earth’s sphere. These are just Spherical Coordinates:

Now we can take the $\hat z$ and project it onto the tangent plane to get a “north” vector:

East is then obtained by using a cross product (right-hand rule):

The north and east facing unit-vectors on the plane will be used as basis vectors.

Now for each lon/lat coordinate, we scale it using earth’s radius (6.317e6[m]) towards the plane:

If we plug this into the equation for the tangent plane:

Which gives us the following intersection point on the plane:

We can then decompose to north and south coordinates (in meters!):

That’s it so far, next time we’ll talk about setting up a simulation.